Resident Lowell Havener smiles and sings along with music therapist Kirsten Wells during the afternoon of Friday, April 17.

Resident Shirley Abraham holds up her cell phone so her son could hear Kirsten Well’s performance.

Bob Rost enjoys Kirsten Wells’s rendition of “Take Me Out to the Ballgame.” She also played songs like “When It’s Springtime in the Rockies” and “King of the Road.”

Kirsten Wells approached the open window with a smile.

“Can I play some music for you?” she asked, her guitar slug around her neck.

Shirley Abraham, a resident of Rising Mountains Assisted Living in Bigfork nodded for her to proceed and sidled up to the screen to hear Wells better. As Wells strummed an upbeat tune, Abraham began to sing along. She even lifted her phone to the window so her son, who was on the line, could listen in, too.

“I could have walked up to their window and had a two minute conversation with them, but music touches them in a way that talking normally doesn’t,” Wells said. “You have emotional connections to music.”

After the song concluded she was off to the next window — the residents had been alerted to her April 17 performance, and anyone who welcomed a bit of entertainment was asked to slide their window open. Some of the residents, like Abraham, came close to the screen to greet Wells and engage in her performance, while others simply sat back, relaxed and enjoyed the music. For many, it was a welcome break in the day, as Rising Mountains, like other assisted-living facilities in the valley, have limited visitors and changed the way social gatherings transpire within the building — think: hallway bingo — due to the coronavirus outbreak.

Wells’ performances weren’t quite what one would classify as music therapy, which is more involved and personalized, but she was happy to offer even a few minutes of happiness to her audience.

“Music therapy is not a well-known profession, at least in the state of Montana,” she acknowledged. In fact, Wells, who owns Flathead Music Therapy, is one of only two certified music therapists in the Flathead Valley.

Nevertheless, the impacts her work can have on patients and clients can be astounding. Her clients primarily include nursing home or assisted-living residents, along with those in hospice care.

“Some people that can’t talk with end-stage dementia can still sing with me. When they hear that song that they know from their younger years, they’ll still join in signing with me and the smiles and the laughs and the engagement that you get in those times is worth it,” Wells said.

UNLIKE HER performance at Rising Mountains, which was more for entertainment purposes, music therapy can either take the shape of a small group session or an individual meeting. At these sessions, Wells will engage her clients on a personal level and invite those who may not have verbal abilities to play an instrument or accompany her song with movement. For clients who are more cognitively present, she’ll use the songs as a conversation starter, with the aim of boosting their mood or creating social interaction. If she plays “Home on the Range” she might ask them about where they grew up, or if she’s singing “When You’re Smiling,” Wells may prompt them to reveal something that makes them smile.

“What I look for when I interact with them is some kind of change, some kind of positive reaction of improvement,” she said. “So, even if I just see a twinkle in their eye or that little smile, that’s something I might not have gotten without adding music.”

Sometimes that change can be more substantial.

She recalled one particular client with whom she visited in Colorado. The man was suffering from end-stage dementia, or degenerative memory loss, and it had been over a year since he’d recognized his own daughter. However, the daughter still attended her father’s music therapy sessions with Wells to spend time with him and one day they both witnessed something extraordinary.

“One day after singing something … he looked to his daughter and said, ‘I know you,’” and then he said her name, Wells remembered. “We [the daughter and I] were both crying.”

For Wells it’s moments like these, both big and small, that make her career a fulfilling one.

“I’ve had patients and residents tell me before, ‘You brightened my entire day — This will make my entire day better,’” she said. “If that can resonate with them for the rest of the day, then I’ve really done my job.”

Reporter Mackenzie Reiss can be reached at mreiss@dailyinterlake.com or (406) 758-4433.

Bob Rost enjoys Kirsten Wells’s rendition of “Take Me Out to the Ballgame.” She also played songs like “When It’s Springtime in the Rockies” and “King of the Road.”

Resident Shirley Abraham holds up her cell phone so her son could hear Kirsten Well’s performance. 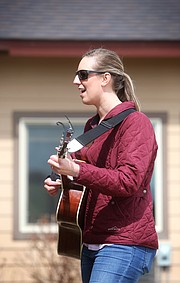