Braised tofu, black bean and kale enchiladas, made to-go by Farm to Fork.

Nothing jumps out as particularly unusual about Anna McCabe’s new dishes at her latest venture, Farm to Fork in Bigfork, but there’s a new twist to her cuisine.

The popular caterer behind Simple Chef Catering started a new line of mostly take-and-bake items about six weeks ago, including dishes such as enchiladas, queso dip and caprese salad. Cutomers might not realize there’s no dairy in the “cheese” or eggs in the pastries. What sets these meals apart — aside from being tasty, nutritional and locally sourced — is they are made completely from plants.

“I wanted to start cultivating food that was totally from the earth,” explained McCabe, who has been catering in the Flathead Valley since 2002.

She personally switched to an exclusively plant-based diet two years ago with the goal of improving her health and reducing her environmental impact. As a chef, she quickly saw an opportunity to add some creative dishes to her business and introduce them to adventurous eaters all across the Flathead.

“A lot of people think plant-based eating is a side salad and everybody who eats plant-based is a toothpick. That’s not at all what it is,” McCabe said. “It’s really fun, really flavorful and you can get really creative with the menu.”

McCabe has created a smorgasbord of meals that might seem impossible without staples like dairy or eggs. Her tuna salad, for example, comes from a chick pea mix, and cheesy dishes like lasagna use tofu as a substitute.

Many of the ingredients — like the tofu from a plant in St. Ignatius — come from Northwest Montana or the greater Pacific Northwest region. Supporting local farmers and helping the environment are just as important to McCabe as whipping up delicious dinners.

FARM TO FORK, as McCabe’s new venture is called, is not replacing Simple Chef Catering. McCabe does all of the meal prep for both of her eateries in the same kitchen on Village Lane in Bigfork. But the unexpected impacts of COVID-19 forced McCabe to bring Farm to Fork to life more quickly than she had originally expected.

“Catering has taken a complete plunge, obviously,” said McCabe, who normally dedicates her business to catering weddings, large corporate events, private dinner parties and other large gatherings. With that business slumping, McCabe decided to ramp up production of her new plant-based menu.

She sells weekly take-and-bake specials at Max’s Market in Bigfork and plans to offer take-and-bake meals as well as ready-to-eat treats at the Bigfork Village Market. She hopes to bring Farm to Fork to other farmers markets and stores throughout the valley, too, to introduce more of the population to the plant-based trend. And her plant-based menu is available for catering in addition to her traditional offerings.

She’s aware it could be a challenge to get locals to hop on the plant bandwagon, especially in an area with such a meat-eating heritage as Montana. But so far, she said a lot of people have embraced her unique, flavorful creations without even realizing their meal was completely made from plants — like her father, a longtime meat lover who unknowingly raved that her queso dip was the best he had ever tried.

She said Farm to Fork customers will likely be “pleasantly surprised, as long as they’re willing to give it a try.”

And for everyone who might be unfamiliar with this style of diet, McCabe pointed out there are also a lot of people in the community who are passionate about supporting farmers, reducing their impact on the environment and eating healthy for an active lifestyle. Plus, many of the newcomers who have recently moved to the Flathead have expressed to McCabe they used to prefer plant-based options, but they haven’t been able to find that fare here.

“There’s a need for it and there’s a community that wants to eat that way,” McCabe observed.

And whether Farm to Fork is your first taste of cheese-less queso dip or your 10th piece of tofu for the day, McCabe said “I think your taste buds will be shocked."

McCabe can be reached at (406) 261-9440 or Farmtoforkmt@gmail.com. Farm to Fork can be found on Facebook at www.facebook.com/farmtofork/and on Instagram @FarmToForkMT.

Reporter Bret Serbin may be reached at 758-4459 or bserbin@dailyinterlake.com. 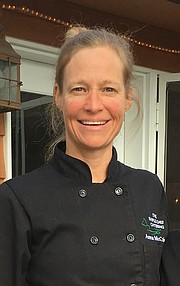 Braised tofu, black bean and kale enchiladas, made to-go by Farm to Fork.