A selection of Mountain Brook Studio’s pottery, including a huckleberry mug and vase.

A display of Peaks and Prairie’s shirts, with the popular Heritage Design at bottom.

The Briney family takes the “Made in Montana” label pretty seriously.

The fifth- and sixth-generation Montanans will be selling their artwork at the Made in Montana Tradeshow for Food and Gifts in Helena next weekend, where they’ll be one of the only parent-son duos on the trade floor.

“We’re proud to be a Montana business. We’re proud to be Montanans,” said Tom Briney, who runs Mountain Brook Studio in Creston with his wife Marcie. For almost 30 years, Tom and Marcie have crafted colorful pottery such as vases and bowls with striking colors and distinctive Montana themes like huckleberries and Indian Summer.

Tom uses a strategy known as reduction firing to give his products their striking colors, with rich blues and deep reds. He said the key to his artwork is his “relationship with the fire.

“I like to use fire as a tool,” he said, channeling the heritage of the generations of Montana Brineys who have lived in the state since the 1800s.

His youngest son, Connor, carries on this tradition, but has diversified into his own medium.

“He grew up in our business,” Tom recalled. He said all three of his children earned their ski passes by working in the pottery studio when they were younger.

Connor started like his father, selling mugs with a design he created of Bowman Lake, but after going back to school to learn screen-printing at Flathead Valley Community College, he decided to put his artwork on apparel instead of ceramics. In the four years since Connor started his own company, Peaks and Prairie, his work has gained popularity in 50 stores across the state and locations as far-flung as Seattle.

His signature “Heritage Design” in the shape of Montana, with mountain peaks in the west, prairie in the east and a river in the middle, has become ubiquitous throughout the Flathead Valley at local retailers like Polebridge Mercantile and large stores such as REI.

“My parents have been very supportive,” he said. “They offer input from time to time, but really just seem to enjoy watching me steer this ship.”

Seeing the evolution of his company and its connection to his family has been a “dream come true,” he added.

And while the Brineys are all based in the Flathead Valley, they said the Made in Montana show has become a key component of their business. Tom and Marcie have been attending the show for 25 years and are one of the longest-running participants at the event.

Connor has followed in their footsteps, attending the event every year since starting his own business. Both generations of artisans see the massive event as a great opportunity to connect with wholesalers, representatives from the Montana Department of Commerce and fellow Montanans.

“Once we started experiencing success in the Flathead Valley, we knew we needed to get these products to other areas of Montana,” Connor said. “The Made in Montana Tradeshow has given us the ability to showcase our line to thousands of shop owners and buyers from across the state.”

Reporter Bret Anne Serbin may be reached at bserbin@dailyinterlake.com or 758-4459. 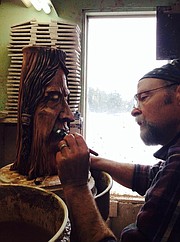 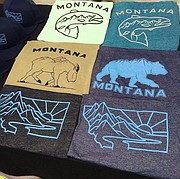 A display of Peaks and Prairie’s shirts, with the popular Heritage Design at bottom.

A selection of Mountain Brook Studio’s pottery, including a huckleberry mug and vase.